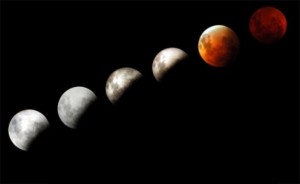 Tonight, most of North America will be treated to an uncommon and beautiful celestial event. The Full Moon will rise tonight at sunset, with the bright planet Mars nearby. As they rise, you’ll be able to notice that the Moon is actually moving relative to more distant Mars – the Moon is orbiting the Earth,  from right to left from our point of view. You can see this motion as soon as the moon rises tonight, but that’s not the rare or beautiful part. The real treat is reserved for those who can stay up past midnight – those night owls will see a total lunar eclipse, the first visible from North America since 2011.

(In this article, all times given are Central Daylight Time (CDT), the current clock time for Manitoba.)

Starting about 12:20 a.m. CDT early on the morning of Tuesday, April 15th, the left edge of the moon will start to look a little… shady. Over the next hour or so, the moon will darken noticeably, beginning with the left edge and spreading across the face of the moon. This is the effect of the moon passing through the outer edge of Earth’s shadow, called the penumbra. The penumbra isn’t very dark, so it doesn’t block out all of the moon’s light, but it does dim it considerably.

Then, about 12:58 a.m. CDT, you’ll start to see a much darker and more defined notch taken out of the moon’s left edge. This notch will also spread from left to right, covering the moon’s surface in an arc of darkness. The moon is now passing through the darker central part of the Earth’s shadow, called the umbra. This shadow will slowly creep across the moon’s face for the next hour or so, dimming the moon’s brightness considerably. You’ll be able to see more stars in the sky as the light from the moon dims, especially if you are also away from local light pollution like city streetlights.

At 2:07 a.m. Central Daylight Time, the moon will be completely immersed in the darkest part of the earth’s shadow. Up until now, the bright parts of the moon have washed out any faint details, but now the earth’s shadow shows us its true colours. The only light that is reaching the moon during the total phase of the eclipse has a very special character. It is the light from all of the sunrises and sunsets all around the world at that time. A lunar eclipse is sometimes called a “blood moon” because the moon turns a deep red colour. (Actually, the colour can vary a lot – depending on the clouds, smog, and pollution in the atmosphere, the eclipsed moon can range from deep red to orange to copper, with brighter or darker patches.)

Mid-eclipse occurs at 2:46 a.m. CDT – that’s when the moon should be at its darkest and most colourful. Fro that point on, the event unwinds itself, with the moon brightening first on the left edge, leaving the Earth’s shadow behind. The total eclipse ends at 3:25 a.m. CDT, and by 5 a.m. the whole thing is mostly over. (See the chart below for times across North America.)

Because of the early-morning timing, no public events are planned, but you can view this eclipse with your unaided eyes. A pair of ordinary binoculars can provide a close-up view. Make sure you look for the red planet Mars, shining just above the moon at its brightest and closest to our planet for this year!

The weather forecast for southern Manitoba is clear and cold, so if you do head out to view the eclipse, make sure you have a way to stay warm! If you opt for an inside view, both NASA and the SLOOH telescope will be live-streaming views of the eclipse. Everyone sees the eclipse at the same physical time no matter where they are, but because of time zones, the clock time it occurs depends on where you live. Whether you’re watching live or online, the ties given above are the milestones to look for.

This eclipse is also a bit unusual because it is the first of a series of four consecutive lunar eclipses. Often, things don’t’ line up exactly, and the moon only skims the edge of the earth’s shadow, providing a partial eclipse – you miss out on the red colour and just see the dark “notch” effect. However, we can see another total lunar eclipse this coming October, and two more next year as well.

For more details on how and why eclipses occur, check out this great article at Sky and Telescope  magazine. Good luck and clear skies!