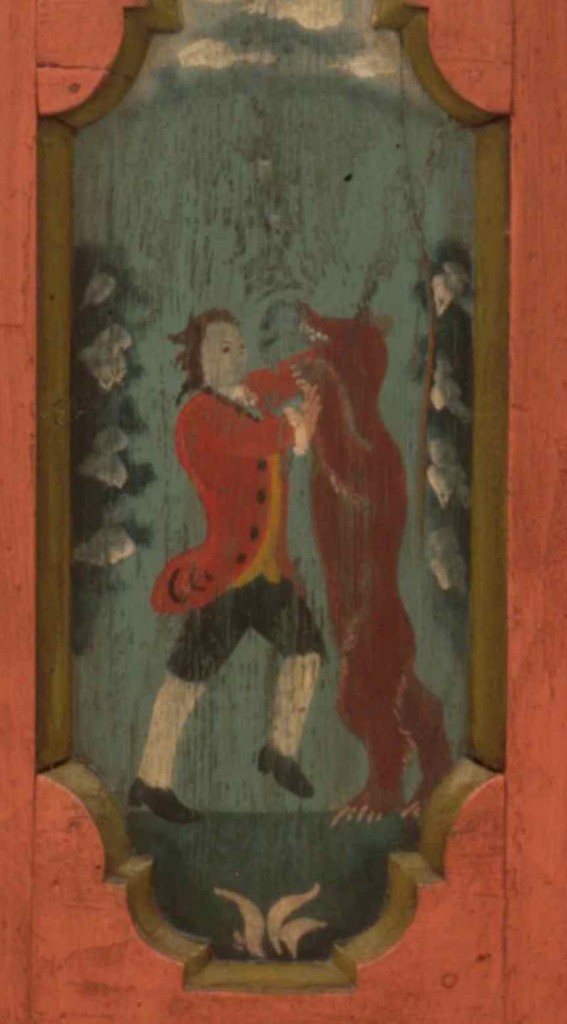 The Manitoba Museum is in possession of a wonderfully decorated Norwegian pine cabinet dated to the late 18th century. This cabinet will be on exhibit in our foyer from May 5 to November 2, 2014. 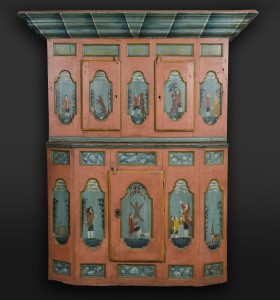 The cabinet has two sections: an upper cupboard and lower hutch, with a total of 3 doors. On these doors and around them the artist created a series of 10 panels to present us with a narrative of heroic deeds and haughty boasting. This story may represent a local folk tale or clan legend. After spending some time looking at these images I believe there may be two ways to view the story.

A young man is confronted by a bear and enters into hand-to-hand combat. Not surprisingly, the man vanquishes the bear. He then boasts of his prowess to a young lady, who gives him berries. In the lower portion he carries home and then displays the bear skin, and then again boasts in front of a crowd. The church may represent a wedding to the girl or the righteousness of the man.

A young man has acquired a bearskin and then sits in his parlour composing a story about his acquisition. He smokes a pipe, symbolizing inspiration or storytelling. In the next panel to the right he boasts to a crowd while still smoking his pipe and pointing upward (notice how he is twice as large as everyone else – The Big Man).  Above we witness his story – each panel in the top portion has a small grey flame at the bottom. Is this the fire-smoke of his imagination? He tells the tale of the bear fight and for some reason he meets a girl at the end who hands him some berries. 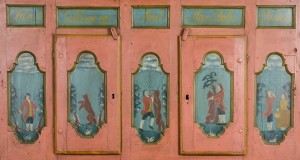 Lower panels of the cabinet

A cabinet of this size and with such high-quality painted details was likely the property of a landowning Norwegian family. The written reference to a married couple and their farm (or village) at the top of the cabinet suggests that it was built for their home, and possibly for the occasion of their marriage.

Norwegians of the 18th century were identified by their first names and patronymic(father’s name). Sometimes they also added the name of their village or farm. Surnames as we know them were only introduced in 1923. The script written at the top of the cupboard would translate as: “Halvord Gulliksen (son of Gullik) and Marit Arnes Datter (daughter of Arnes), at Lundem.” Halvord and Marit were probably the original owners of the cupboard.

This rare and splendid example of European folk furniture was donated by George and Tannis Richardson, generous supporters of The Manitoba Museum. Mr. Richardson is a Founding Member of the Museum.