Chris Kelekis and His Family Restaurant

The C. Kelekis Restaurant, a Winnipeg icon renowned as one of the finest diners on the prairies, closed in 2013 after 81 years of service. Located on Main St., it was an eatery that provided more than just good fries: there was always a chance you would meet a friend.  The founder of the restaurant was Chris Kelekis (1886-1957). He immigrated from Triglia, a Greek settlement in Turkey, in 1913 following his beloved Magdeline Alaglou, who came with her brother and sister-in-law. After first living in Montreal, Chris and Magdeline moved to Winnipeg in 1918 and eventually had eight children, all of whom were involved in the restaurant in one way or another. 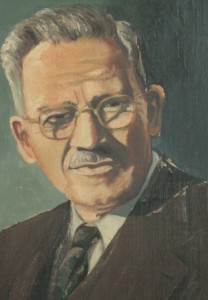 Oil portrait of Chris Kelekis, date unknown. The Kelekis family had asked for a photograph of their father to be enlarged by a Winnipeg photography studio. As a surprise gift for a family the studio commissioned an artist to paint this portrait based on the photograph. Painting H9-38-85. Copyright The Manitoba Museum.

Chris (originally Chrystomis) first pushed a cart selling peanuts and popcorn at various events, and eventually sold chips from a Model T Ford truck, on the same spot where the restaurant was eventually located in the early 1940s, 1100 Main St. It was expanded in 1955, and the rest is history.

A year ago the Kelekis family donated a number of items from the restaurant to the museum, including a collection of dinner ware, their well-used toaster, a framed print of Queen Elizabeth II that had been on the wall since the 1950s, and a menu (also from the ‘50s). A painting of Chris Kelekis, featured here, was also donated.

Thank you to the Kelekis family for the good food, the memories and the donation of artefacts.