Humpty Dumpty smiled contemptuously. ‘Of course you don’t — till I tell you. I meant “there’s a nice knock-down argument for you!”‘

‘When I use a word,’ Humpty Dumpty said, in rather a scornful tone, ‘it means just what I choose it to mean — neither more nor less.’

‘The question is,’ said Alice, ‘whether you can make words mean so many different things.’

‘The question is,’ said Humpty Dumpty, ‘which is to be master — that’s all.’

– Through the Looking Glass, by Lewis Carroll

When I started to work at the Museum just over 20 years ago, my job title said that I was the “Assistant Curator of Geology and Paleontology.” Quite a mouthful, to be sure, and one for which the meaning was not entirely clear. Certainly people could understand the “assistant” part, except that I wasn’t actually the assistant to anyone, since I was also the only staff member in geology and paleontology. Rather, the “assistant” in my title was like that for an assistant professor at the university. It meant that I was on the first rung of progress through a professional career, and if I worked hard then I could look forward to being associate curator, and then full curator.

But what about the “curator” part of the title? What did that mean?

In the early 1990s, curator was not a commonly-used word, to the extent that it seemed like a lot of people had never heard it. I would tell them that I was responsible for the rock, mineral, and fossil collections, and that I created exhibits and answered inquiries. Those were really the things that were emphasized in my job description, and to be honest I didn’t look further than that into what a curator might be. 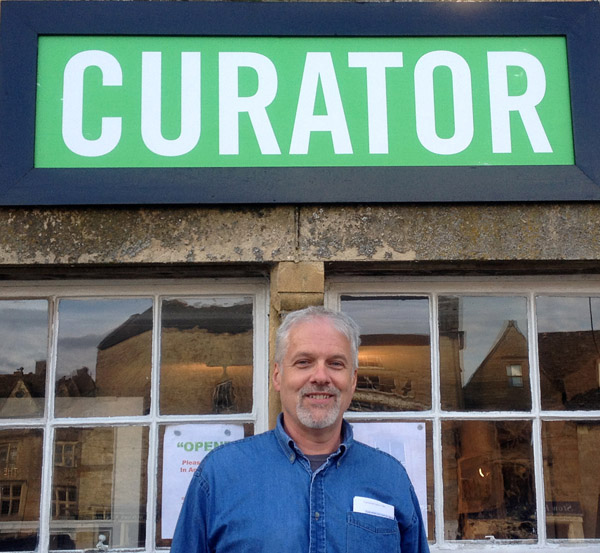 A curator stands outside a shop named Curator at Stow-on-the-Wold, England (photo by Katie Murphy)

Nowadays, of course, it is a popular thing to be a curator. A quick online search of this word reveals more than twenty-five million website results! Out in the world we hear about fashion collections that have been “curated” by particular experts, or about an interior designer acting as “curator” for the objects included in the public rooms of some famous person. When a word goes from obscurity to flavour-of-the-month, it is bound to be diluted and broadened, as I found earlier this autumn when I came upon an art and décor shop called Curator in the west of England. And beyond the realm of objects there are curators of paper documents, content curators who collect and organize information, and curators of the digital world (as demonstrated in this Dilbert cartoon).

But where does the word come from, and how does it lend itself to so many different purposes?

Curator is derived from the Latin curare, to care for, so a curator is a person who takes care of something. In fact, in Scottish legal terms a curator is someone who is the guardian of a minor or mentally ill person. Several other nouns that come from the same root have religious connotations, such as the English curate (an assistant priest), the French curé (a parish priest), and the Curia (the central administration of the Catholic Church). It is, perhaps, no coincidence that the name for our profession gives some evidence of the reverence with which we hold the objects given to our care.

Even if you hear that someone is a curator at a museum, as opposed to all those other types of curators, that still doesn’t necessarily give you a clear idea of what that person might do. I know of English museums where the people called curators are what we would call Collections Specialists at The Manitoba Museum, people who are responsible for the care of collections but not their interpretation. Elsewhere, the curator may be the administrative lead for an entire institution, a position more equivalent to that of our Executive Director. In museums of art, curators may have no responsibility for long-term care of collections; rather, they may be specialists hired as consultants to select and interpret the works for a particular exhibition. 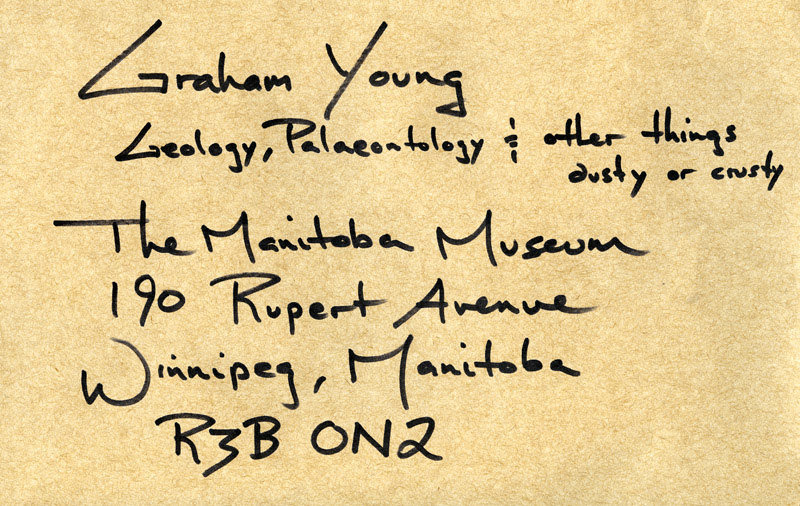 One way of looking at my job, according to an envelope received from a curator at another provincial museum

And how do all of those other jobs relate to my job, you might ask? If someone asked me nowadays what the tasks are for the Curator of Geology and Paleontology, I would have to say that it includes some of the sorts of work included in every one of those other “curator” jobs! Certainly I have a role in caring for the collections, I do field collecting and select other pieces to add to the collections, and I am involved in the identification and cataloguing of specimens. But I also carry out primary research about certain parts of the collection, which adds to the body of world scientific knowledge, and I publish that research in scientific journals and present it at conferences. I identify rocks and fossils for members of the public and I give lectures to interested groups. And of course I develop exhibits, including the preparation of grant proposals to raise money for particular parts of our galleries.

Writing about my job in this way, it seems like an awful lot.  I guess it is. Manitoba is a very big place, and the Museum has a modest number of dedicated curators whose job it is to cover and represent that territory. Like all the other curators at the Museum I absolutely love this job; the diversity of work is just one of the things that makes it possibly the best job in the world.